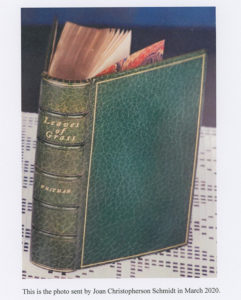 The son of longtime Chicago Bookseller, Harry Stern, is asking for help finding an item missing from his late father’s shop. If you have any information about this book, please get in touch with Mr. Stern III. Below is his message and a photograph of the missing book.

My name is Harry L. Stern III – I’m the son of Harry L. Stern who was a member of ABAA for many years. My father operated his business from Chicago. Sadly, he passed away a year ago. I’ve been cleaning out his office and going through his papers, and now I need to report a missing book.

Shortly after my father passed away, I received a message from Joan Ward, his office assistant at Regus in Chicago, to contact a woman named Joan Christopherson Schmidt about a missing book. I reached her in January 2021, and here’s what she told me.

Joan Christopherson Schmidt’s husband was Frederick G. Schmidt, known to his friends as Fritz. He and my father were friends. Fritz had a special relationship with Robert Frost, whom he met at Dartmouth when Fritz was young and Frost was old. Fritz later collected Frost’s work, and after Fritz passed away in 2005, his wife Joan gave his Frost collection to the University of Wisconsin at Eau Claire (https://www.uwec.edu/kb/article/guide-to-robert-frost-collectionfrederick-g-joan-christopherson-schmidt-1914-2002/).

Fritz also owned a copy of Walt Whitman’s Leaves of Grass. Sometime about 20 years ago, he gave it to my father to sell. My father came up with an offer for $5000, but Fritz felt that the book was worth more and turned it down. The book stayed in my father’s possession. Now, Joan wants the book back. The trouble is, I can’t find it. In September, I cleared out my father’s office at 777 N. Michigan Avenue, including the storage locker, and the book wasn’t there.

However, I did find some correspondence, as follows. (1) Typed letter from my father to Joan, dated April 25, 2011, mostly about Frost but with this sentence: “Meanwhile, I am offering the Whitman again, the main problem being that the rebinding cut off a key phrase on the original cloth binding.”

(2) Handwritten letter from my father to Joan, dated July 30, 2019. It says (in part), “I do not see that volume here right now, but will be checking old records regarding the collection that are in storage.”

(5) Handwritten letter from my father to Joan, dated June 23, 2020. It says (in part), “I have been quarantined since March 11 and not able to go back to the office. Whenever they lift the ban, I will get back there and look again for the book … in a storage locker also.”

(6) Handwritten letter from Joan to my father, postmarked September 25, 2020. It says (in part), “I am getting a little concerned and almost wish Fritz had accepted the $5,000 for his W. Whitman Leaves of Grass 1856 edition which had 20 new poems added to 1855’s twelve but he did not think that was enough.”

The above correspondence convinces me that my father did in fact have possession of the book at some point in time (2011) and then was not able to find it later (2019). In December-January of 2012-2013, we did a major remodel of my father’s office at 777 N. Michigan – we packed up everything, moved it to temporary storage, then moved it back when the office was new and clean. It’s possible (but unlikely) that something may have disappeared during the back-and-forth moves.

I’ve asked Joan Ward at Regus about correspondence relating to Leaves of Grass, but she has not come up with anything.

My father lived in Lake Forest, Illinois, and I completely cleared out his rooms in August but did not find the book.

I’ve contacted Hindman Auctions in Chicago, and they are checking their records to see if this copy of the book has come up for auction. I’ve contacted the International League of Antiquarian Booksellers (ILAB) and will add this book to their Missing Books Register.

If anyone at ABAA has any information about this, please contact me. Thank you.